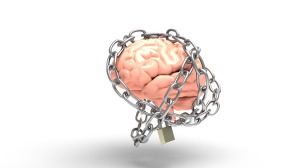 Mental illness is a frightening reality that has been falsely stigmatized in many of our communities. People ignore it, or are ashamed of it; they blame themselves for lack of faith; they blame demons and black magic; they avoid seeking medical treatment for it.

I have encountered many cases of mental illness in interactions with people in my personal life, as well as in my role as a chaplain. I have discussed these matters at some length with psychiatrists, and have attended various workshops about mental illness. I am also familiar with, and endeavor to remain faithful to the Islamic theological and legal tradition. So, with this background, let me make two quick points:

1. Being a good, practicing Muslim does not make you immune to mental illness

Your iman (faith) in God can help you in coping with mental illness, but it does not make you immune to it, just as faith does not make you immune to influenza, heart disease, cancer or broken bones. Mental illness is also a type of illness; after all the brain is part of the body. Hanafi jurist Ibn al-Humam (d. 861H) classified insanity as an involuntary contingency (عارض سماوي), and the same applies to many other forms of mental illness.  So, if you are suffering from mental illness, you do not have to assume it is because of weak faith or lack of spirituality. Do not be afraid or ashamed to reach out for social and medical help. As a Muslim, you are not committing any religious violation by taking medication. The Prophet Muhammad (peace be upon him) said,

for God has not made any disease without making a cure for it.”

2. But what about jinns and magic?

Insanity (جنون) was defined by pre-modern Muslim jurists as a disorder of the mind that prevents the person’s utterances and actions from being rational. It can be an ongoing condition, or have intermittent episodes. Most Sunni theologians do believe in the reality of demonic (jinn) possession and black magic. But this does not mean they are the cause of all mental illness. It is noteworthy that Hanafi jurist Amir Badshah (d. 972H), while discussing the “contingencies of capacity,” points out that there are two types of insanity: one caused by an imbalance in the brain, and which can be treated (with medication), and another type that is caused by demons, and against which spiritual remedies (such as Quranic recitation) can be of assistance1. I would go further to say that even if one is certain of the involvement of jinns or black magic, one can and should still pursue medical treatment for the symptoms, in addition to spiritual remedies such as Quranic ruqya.
May Allah protect us, and grant us strength to face the various tests in our lives.